My week starting with our anniversary 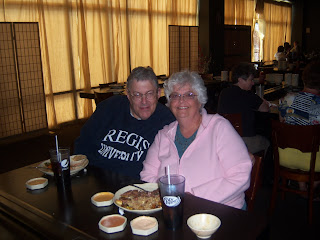 We had talked about going to
Niagra Falls.  Just talked, no plans were made.  We decided that we could do that some other time.  Our day was quiet, kind of, as the granddaughters had spent the night before with us.
After they left we went to eat at a Japanese Steak house and went to a movie.
A not so good movie, with Drew Barrymore in it.
After 40 years, having a quiet anniversary is just fine.  These chocolates were from my best friend.  They were yummy.  I found my stack of wedding pictures accidently a couple of days before our anniversary.  I had rescued them from a not archival safe album.  They will be the next to be scrapbooked the right way. 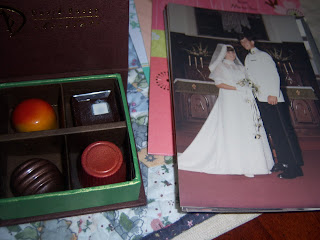 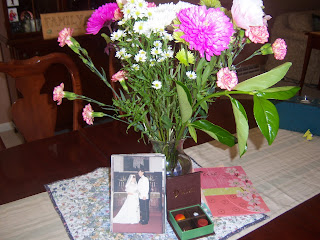 Some pretty flowers from my Hubby.
Okay the rest of the week......................
Monday came too quick.  I had an all day long review class on Saturday so Sunday was my only day off.  So Monday and Tuesday were a bit painful.  I took naps every day except Friday.  That really helps.  Wednesday my eye doctor appointment.  I was so worried that I wouldn't get out in time to make it to work/school, that I totally thought the time was an hour earlier than what it was.  I really didn't think the appointment was but the time itself.  My husband called and when I told him where I was, he said but your appoint isn't til 2.  I said it was 2 and he told me that it wasn't.  Geez, that was a weird feeling.   I still didn't get the whole appointment in.  I have to go back to get my eyes dilated next week.  My vision has changed esp. in one eye.  The reason my be cateracts.  They aren't bad but they are there.  I also have a cyst as well.  Passed on having it lanced.  So new glasses sometime soon.  Then Thursday........wake up call from my nap,
Goose was at her new school and had an accident.  The kinds that involves wet clothes.  So Grammy went to their house couldn't get in, so on to the school where her daddy works to get the key.  Dry clothes and off to her new school.
Another adjustment with tears this week.  I helped her change into dry clothes.  She said, "Oh, this feels better."  She said, "I just couldn't make it Grammy."  I told her it was okay, I had accidents, too.
A funny look from Goose.
No tears when I left as she said she could see me at my school.  She saw me there now a couple of times.  I think she needed to see that I was doing something, since we were together for so many years.  Okay, then came the exciting part.  The last one and a half hour at school were spent in the hall under TORNADO warmings and sirens.  Some kids were really scared.  We worked through that and all the rain and all was okay.
All around us, not too close, there was a couple tornados and damage.  It was definetly good practice but a little exhausting.  We did see a brief double rainbos.  I took a picture in the rain on my cell phone.
Friday, I went to work then beat it to the Backwoods Fest.  Close by on a farm tucked into the woods, there is this one week-end where it is transformed into tents, booths, kettle cooking fun.  I went by myself so I could quickly scan the arts and crafts.
Nothing too exciting, or nothing I needed.  Since we have de-cluttered and really tightened our finacial belts, I really think when I spend.  I got a couple things for an upcoming swap.  (One which my dog liked and tried to chew)  One booth took my eye.  Two women made these adorable dolls.  Some were more Raggedy
Ann looking than the one I splurged on.  They were a little expensive, I thought, but people were grabbing them like crazy.  I love rag dolls.  I chose the pink outfit but I think it was her face.  Isn't she the cutest? 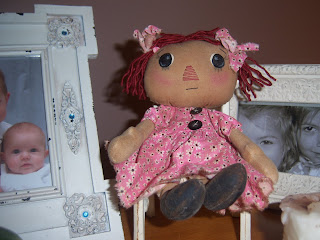 It was nice you got to go out to eat on your anniversary. Sorry the movie was not so good, but getting out just the two of you was probably enjoyable.

The flowers are lovely. Those chocolates look yummy!

Sure glad the tornadoes missed you. What a busy and anxious time that must have been.

What a lucky little girl Goose is...her Grammy is so sweet and helps her so much.

Your doll is cute as can be.

Hope you have had a few deep breathes and some let down time after all you have been doing. You were busy!

Hi Debby,
I told my friend that someone in Blogland (you) is married for 40 years! I love it when people are still together and go to movies and diner when they are so long together! I think it's so romantic!
Enjoy the rest of the weekend,
Maureen

Hey Debby..I think my breakdown is over for this week..lol I swear my hormones must be crashing!!
Thank you for your support..your words of wisdom..your Hugs and of course your love!! I needed that!!

I do so wish we had the money to come up for the fair!1 I already have it in my calender for next year..fingers crossed..maybe!!

Happy anniversary!! Love that ya'll were able to go out!!

I am sorry Goose is struggling this year..she will get into a routine soon. My Owen is having a time also..he has always been either here with me..or at the daycare where his mom teaches..now he is in public kindergarten..he hates it.You ought to hear the excuses he makes up not to go..lol

The doll is sooooo cute!!

Hugs and love..Cindy from Rick-Rack and Gingham

Someone had been very busy lately! Happy Anniversary to you. Bet you will have lots of fun at that Columbus, Ohio fair. I hope you get to take lots of photos to share with us! ;)
Maureen

HAPPY ANNIVERSARY!!! A lovely photo!! I hope your eye is okay!! Poor little goose. My littlest hates to stop playing, and go. I send extra clothes
in his backpack, just in case!!

Well, Happy Anniversary to you guys! And your week sounds busy..that is one darling doll! :D

Oh...Debby, I wish I could come to the Fair with ya. I love the sweet raggedy ann-ish doll!!

No wonder you are soooo talented. SU for 6 years, I knew I spotted rare talent.

Happy Anniversary to you and your beloved.

Wish I was going to the Country Living Fair, but our local Apple Festival is happening in town and I couldn't miss all the apple deliciousness for anything in the world.

Happy Anniversary! looks like a nice and relaxing one!

Happy Belated Anniversary! I think quiet anniversaries are my favorites!

Congratulations on your anniversary! I want to be someone's wife for 40 years! :)

I think I'm going to follow your lead. And my Mom's too. She was also married to my Dad for 40 years. :)