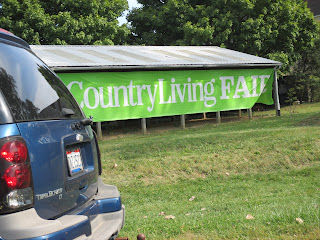 I had a crazy busy week.  It seems like I was coming and going all week long.  My friend is out of rehab and home.    The running should slow up a little this week.
I had pre-ordered a week-end pass.  A couple of friends that were going with me had to cancel.  I don't mind going alone but it isn't as much fun.  I just passed through many things thinking I would come back on Sunday.  I only took pictures of the campers.  I was there less than two hours and really started to not feel well.  I knew there was a walk back to the car so left as soon as I knew something was wrong.  No big deal as I get way too hot.  I needed to go back to get my friend home from rehab.  I was so exhausted Friday night.  Then we had three showings scheduled from 9:45 til 11:00 a.m.  I could never have gotten ready without all my husband's help.  I ended up with a sore throat.  Better today but loosing my voice. 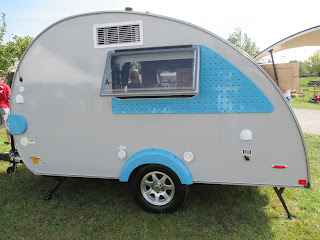 I loved this little camper.  It's a new build. 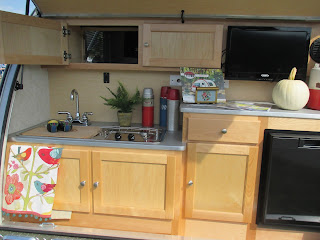 The kitchen pulls out from the back. 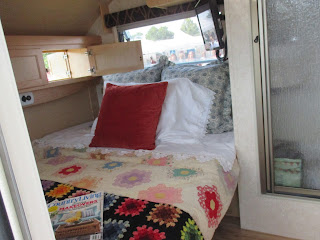 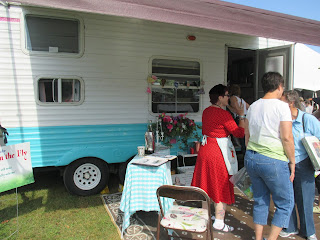 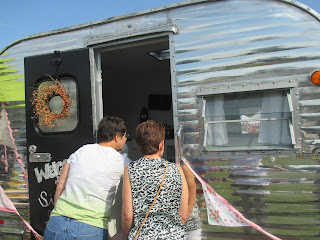 This is not an Airstream.  Just a redo to kind of look like one. 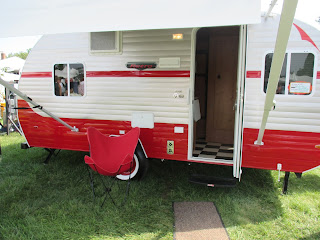 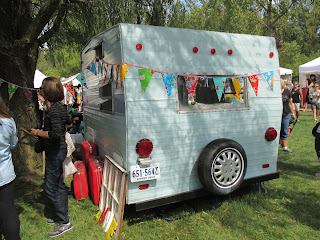 This was the vinyl cloth ladies camper.  I think she uses it for storage.  Pretty sweet. with that banner.

What did I buy?  Earth Angels had a bunch of little grab bags.  So cute.  I got some of those.  Then the Pink Lady that is local and someone I have gotten to know had a doll that I got.  It was the first doll I got my daughter when she was one.  Brand new but still from that time. I had been looking for one.  I am glad that I went.  I decided not to go today.  It was nice and cool but I knew I had better not push it.  We did make it to church and went out for lunch.

Hank and I both went to the doctor this week.  He has been having tummy problems.  Little stinker eats everything off the floor and bugs from outside.  He was okay all week-end and got sick today.  Actually the last three week-ends.  This morning my husband said he heard him chewing something.  He found a sliver of glass in his mouth.  Where he got that we have no idea.  And it missed the clean up.  Thank goodness he didn't cut himself or swallow any of it.  We aren't getting much sleep.  He wants to get up at 5 a.m.  He licks Hubby's ear to wake him up.  It's really hard to get a picture of him.......they usually look like this. 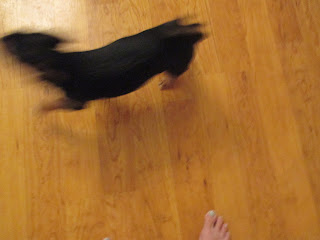 he is turning colors.  He has lost a lot of the black on his face.  See his neck changing colors.  HE has some new white places too.  His face is soft but his back hair is coarse.  He has a Yorkie face but has long legs and a long body.  He now weighs 9 pounds.  He weighs almost as much as both parents weighed together now. 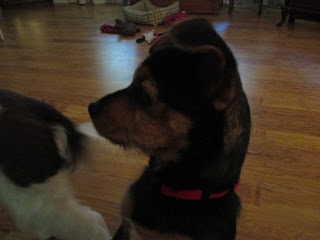 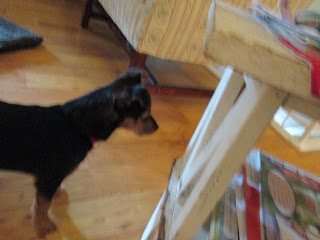 He has been chewing on this table.
Well, that's it for tonight.  Hope you all have a great coming week,
Posted by Debby at 7:01 PM 11 comments:

Today is our 45th wedding anniversary.  It's hard for me to believe how fast these years have gone.  We have been through a lot and our lives have been blessed.
The Coke can was a pure accident.  We went to a cute little deli in Hilton Head and they sat this down in front of my Hubby.  Mine said Mom.   But I thought it was perfect.
So what did we do today.  Nothing, really nothing.  Yesterday was a rotten day for both of us so we just stayed home.  I did venture out to give our son's girlfriend a ride home from the ER.  I sure have been spending a lot of time at hospitals lately.
Hubby got me beautiful roses.  We had flowered delivered from our son and his wife and their daughter Mabel as well.  She came to spend a little time here tonight.  She loved Grampy's new big chair and made a beehive right for it.  She and both doggies were on Grampy's lap.
We will go to church tomorrow and maybe go to a movie.  We can celebrate anytime.
We are invited for dinner to our Mabel's house tomorrow evening.
Last week my friend fell and ended up in ER, then the hospital and now in rehab.  She is 84.  She is doing okay and hopefully will be home next week.  Her sons live out of state so I have been helping her.  She is very sweet and appreciative.  We have been friends for almost 30 years. 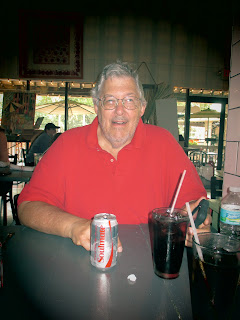 Yesterday was my Mom's appointment with the oncologist about her bone marrow biopsy results.  Not good.  I really didn't know how they could be.  Her bone marrow is 80 percent involved.  Chemo would help but she doesn't want it.  I can't blame her.  She is 88 .  She basically has no immune system.  Anything could take her.  The doctor said she could live a year just like she is right now but if she gets an infection or has a fall it will be the end.  Of course, she is determined that she will do what she wants so she started back driving and going shopping.  The doctor said driving wasn't really a good idea as she could pass out.  She said she wasn't giving up her home or her car and she would just pull over if she felt like she would pass out.  See what we are dealing with.  But it is her life and her choice on how she lives out her time.  I wish she was easier to be around and that we were closer but we never have been.  It is what it is.
How do I feel about all this.  It's sad.  It's scary.  Just knowing that the end could happen anytime.
It's sad knowing that others in our family are also going through uncertain times.  But you just keep living each day.  Every day is a gift.
And 45 years of being married to this guy has been a gift and a blessing.
Posted by Debby at 7:41 PM 18 comments: 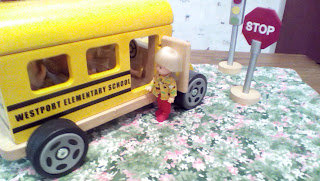 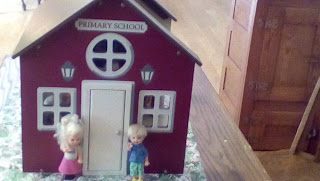 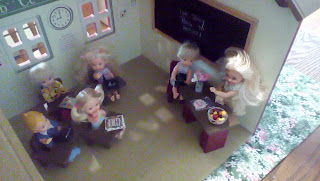 The children are back to school.  Still seems strange.  They have been back here for three weeks.
I am tired of this heat.  Remember I don't complain about winter.
Things here remain buzy and crazy.  We go to the oncologist on Friday to hear about the bone marrow biopsy.
My 84 year old friend that lives here also fell.  Her sons live in Colorado and Arizona.  I went to ER and stayed with her til she was admitted.  Now she is in rehab.  I have been visiting, and taking care of her home.  She is very appreciative and I do not mind at all.
Now another family member has cancer.  It's sad but we are hoping the treatments will be successful.  Oh. I hate this disease.
Dianna posted about Ceekay passing from ovarian cancer.  She fought that battle for over 12 years.  She was such a sweet person.  Her last post a few months ago sounded like a good bye.  She will be missed sadly by her family and many others.
On another note.....Hubby took last week off.  It was nice .  We didn't do much other than eat out alot.  We went to one movie but left before it was over.  The movie we wanted to see wasn't on and this ended up being too violent.
Poor Hank was really sick over the weekend.  He got a paint crayon that fell off the counter.  I don't even think he ate much.  He was so sick.  We called the vet for advice.  He finally started to perk up.  He still isn't too interested in eating but he has his energy back.
Well I will try to get back to normal catching up on my blog reading soon.
hugs
Posted by Debby at 1:20 PM 8 comments: