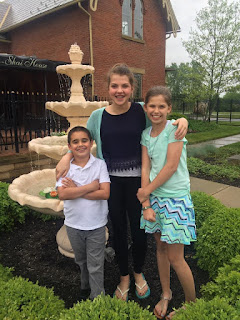 Our oldest granddaughter on the right with one of her best friends and her little cousin.  This was taken at the friend's big sister's graduation party yesterday.  I was her pre-school teacher when she was 1 1/2.  We have since been good friends with their family.  I love how my grandkids are friends with my friends.  Our granddaughter is older than her friend.  A little height difference. 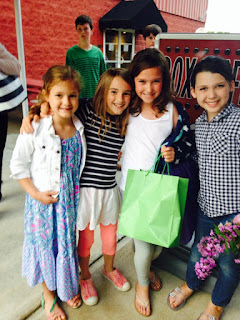 Her is Mabel on the left.  She is growing up.  Her BBF is in the pink leggings.  Their mommy's and daddy's have been friends since middle school.  Now the little girl on the left is Goose's best friend.  That's Mabel's cousin.  Small world.  I am looking for a picture to post of  Goose. 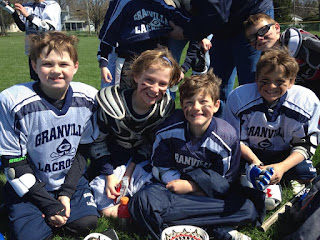 The cutie second from the right is our oldest grandson.  The boy to his right is his BFF and brother to Mabel's BFF. 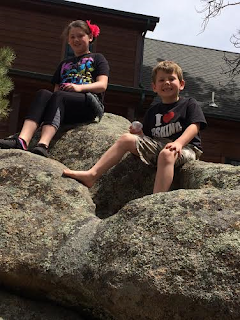 Here are my Colorado kids enjoying a weekend in Estes Park.
These were all from this week-end.  I will have to add Goose later.  We got a really cute picture of her and M. at the fourth grade music program.

I have to get an I phone  to make this easier.

Hello my friends.  I have been a little absent lately.  Just busy like everyone else.  Sometimes I think I will just stop posting.  Comments have dropped lately.  I still see several read just don't comment.
I am afraid my posts are boring.  I still can't add a picture from my mini iPad.  Grrrrr.  It just freezes.  So I have to take a photo with my camera and download to the dinosaur of a laptop or post a bad picture from the Kindle.  Grrr to both.  The pictures I want to share are from the mini.

Okay the subject BATHROOMs
Sorry to my friends in NC.  I can't visit you as travel from to Ohio to N.C. Has been banned.  Now, just how are they going to monitor this?
I have a couple of bathroom stories for you.   When Doodle and K Bug were about 6 hubby and I took them to the movies.  Of course as we all know, little girls always have to potty.  So I took them in and they did their thing.  When we went to wash our hands, yes, I went too, I noticed urinals.  Hmmmm.  When we were finishing a man walked in and was laughing.  Outside the open bathroom my husband was pretty much mortified trying to tell me we were in the mens' bathroom.  The girls  had no clue.  I thought it was funny.  Well looking back, why didn't he come in the bathroom???  Maybe because girls (we girls) were in there.
ANOTHER story....... When I was mayor of ClownTown which is was three day event,  we always had an outside top clown be the dean.  My dean was a teacher from out of town.  He got there late and was getting into costume in the men's' bathroom.  Another open bathroom concept in a college.  I needed to go over things with him before we started.  So I just went in the bathroom to talk to him.  He was right by the door facing the mirrors.  I seriously never gave it a thought.  I happened to glance over and saw some legs under a stall.  Then I realized where I was.  Yep I did it again.
I will admit to using the men's while at Country Living Fair to avoid the line for the woman's.  Hah, several of us did.  Imagine the faces when a guy would walk up and see the line of girls.  They always got to cut in.
Why is the current BATHROOM  situation such a big deal.  I have some ideas.  Make them all a one person toilet with unisex on the door.  But please men, put down the lid.
Another idea go before you leave home.  You could always wear Depends.  Might be messy.

Those are funny stories but these AREN'T.
Once when traveling alone with my youngest.  The unpredictable one.  He headed for the bathrooms. But he headed for the men's showers.  I had to follow him to get him out.  I did see a fully clothed man an apologized.  This was at a truck stop.  I was in a hurry to get home because Hubby had been hospitalized.
Another OH SO NOT funny....
My son was in second grade and was not allowed to use the boys bathroom.  Why you ask, because since he was adopted he might have been abused. 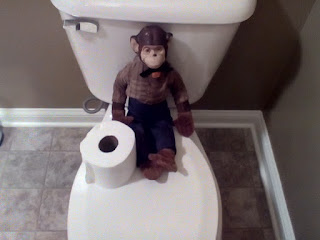 Hello.
I hope you all had a Happy Mothers Day.  That includes all the moms including step moms, aunties, furry pet moms and just about everyone.  Sometimes Mothers Day can be hard for some for many reasons.  I fall into that category.  So moving on.
I am finally ready to do some flowers.  Then the forecast said last night that there might be frost.  My flower beds keep bringing me surprises.  I think the former owner was either a gardener or had someone professional do the work.  Things keep popping up.  Where there were daffies there are new things popping up.  I have roses too.  Not much to plant for me.  Soon I hope to have planted something to show.
I got lots of flowers from my family for Mothers Day.  If I could figure out how to post the pictures on here I would.
Saturday we had our oldest granddaughter and my Laken.  We had lunch and went to Dick's to shop.  Then home for puppy dog pl 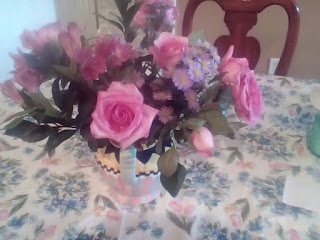 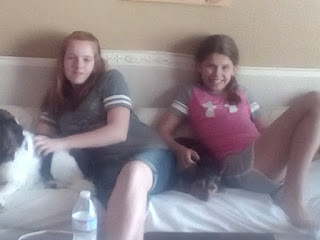 ay.  The girls made mini geraniums for their moms.  Then we went to a magic show at our church.  It was a fun day.  I cherish the time I spend with these 13 year olds.
I have a busy social week ahead.  It seems like the second weeks are like that.  Then my son's birthday and my daughters.
I will be back soon.  Off to meet my doll friend.
Hugs. ( These pics are from my kinle and a little blurry)
Posted by Debby at 12:51 PM 8 comments: