Praying for all of you in danger. 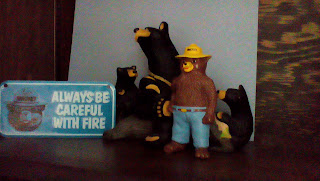 In honor of the day, Here is Hank waiting on football season to start.  Go Ohio State Buckeyes.  And this is  picture is already on my Kindle.  He is bigger now but not much.  He is getting onery.  I have never seen a dog run like this one. He runs and ducks under the furniture.  We are scared if he runs into something at that speed that he will get seriously hurt .
An update on our mothers.  My Mom's blood work did not come out well.  Count is still rising.  They are doing a blood marrow biopsy tomorrow.
My husband's Mom is now in hospice care while in the nursing home.  So sad as she sleeps most of the time and isn't  aware of what is going on.  My SIL visits her everyday and will feed her when she will eat .
Our moms are 87 and 88.  We can just hope and pray that they aren't in pain.  My Mom says she feels better. To end on a high note.  We are having cooler weather, and I love that.  The grands are doing well adjusting to being back in school. 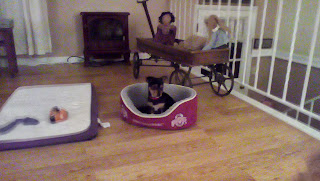 I ran away with the Circus 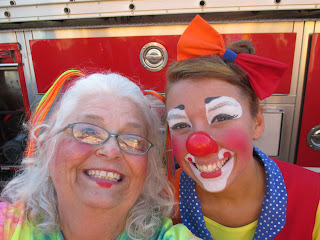 If you have wondered where I was.  Well, I have been with a bunch of funny people.  The American Clown Academy was this week.  I am just a helper but that means I can spend as much time there as I want.  I was in charge of the pre show that included a meet and greet with everyday heroes and the clowns attending the academy.  I made little autograph books for the children attending to get autographs.  There were around 80 children there, I am guessing.  Lots of adults.  It's a bad timing because school just started.  The show went til 8:30 p.m. Too late for little ones that have school the next day.  The camp is held this week because school is starting.  It's a kids camp.  It will close after our week there.
The faculty and moi don't dress in costume because this is for the students.  I have to add a little color to myself so that when the first guests show up they know they are in the right place.
The show was really great.  Most of my pictures were taken before the actually show.  You can see more on my FaceBook.
This has been a good week knowing that I could escape the real world if I wanted.  The friendship you make with these campers and faculty is ever lasting.  Although not everyone comes every year but then there are new friendships.
I was surprised with the little makeup I had on that some of the newbies didn't know who I was.
I will head to the camp to say my goodbyes til next year today.  They will all start heading home tomorrow.  Can you believe one of the clowns came from India.
REAL WORLD
My mom went to the oncologist on Tuesday.  He wants to have a blood test drawn at his hospital on Monday.  I think he wanted a clear picture without steroids and antibiotics of what is going on.  He said he would call with the information the next day.  I think it was a way of giving some hope.  He mentioned chemo but my mom won't do that.  So we will see.  My brother has been with her all week, so she is elated.
Thanks for all your kind thoughts and prayers.
xo

Hank and I are back at my mom's.  Her white blood cell count has now risen to 159,000 . High normal is 10,000.  Waiting to see the hematologist Friday.  Her family doctor is not sure we can make it til then.  All the labs were way off.  She is miserable. The family doctor gave me her report.  It says critical lab results.  She needs to be in the hospital.   But they don't have a specialist here.  He said he doesn't know what to do.  Please pray that something is done soon. 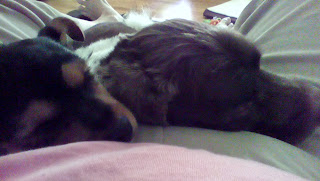 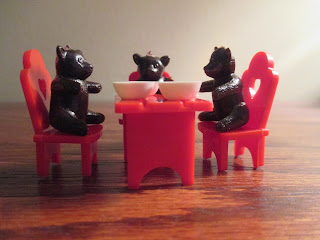 Hello there.  I haven't been able to do much blogging lately.  I hope that I am not missing any important posts.  I will be back again more often, I hope soon.
My mom isn't doing well.  My brother left for the time being, thank goodness.  He sure stirred up things.  Mom was in the hospital all last week.  She had two blood transfusions and was treated for pneumonia.   She is home now.  (Forgive me if I have already written about this)  But she is weak, shaky and still running a temp. I went back to take her to the doctor for a post visit after being released.  He thinks her pneumonia  is better.  The fever may be related to her acute leukemia .  Now waiting to hear from her oncologist.  She is home alone but she has home health care and a physical therapist coming in for a short time.  Neighbors are also checking.  So hoping that someone will suggest that she needs more care.
Last week I went to the doll auction here.  It was a three day event.  I did find some treasures on the last day.  The other two days were online auctions.  I only sat through a bit on the second day but went to the one that's called a treasure hunt.  It's  not my favorite.  But the talk there was that there were many new faces and the prices were high.  There were tons of Shirley Temple dolls and tons of the small Madame Alexanders.  Those were still in the boxes unopened.  I believe it was an estate of two big collectors.  I did get 4 Shirleys.  I sold three already to ladies in my FB doll group.  I am keeping the last one for my daughter since it is a Heidi Shirley.  There was some nasty dust there that bothered a lot of people.  Must be from the storage.
Hubby and I took the week-end for ourselves.  We bought a new recliner did a lot of dining out.  Rode to the lake where our cottage was and went to a movie.  We saw Train Wreck.  It was a good movie.  I think the trailers make it seem like a different movie than what it was.
So that's it for now.  My life is not so interesting right now, but maybe that's a good thing.
Toodles
Posted by Debby at 11:13 AM 11 comments: