Sleeping over and some random thoughts 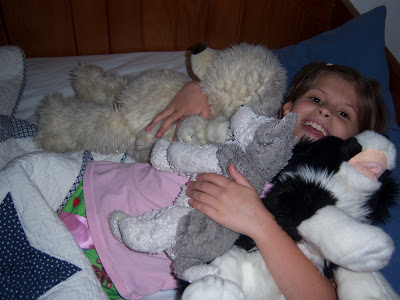 K. Bug and Goose got to spend the night at our house. It doesn't happen often enough. We love having them. They have to wash everything they bring with them when they return home because of their mom's allergies to our dogs. I know, I know. But K. Bug brought her beloved huskie dog. I reassured Goose that I had plenty of snugglies here for them. They were so excited to choose what to sleep with. Goose is sleeping on an inflatible toddler bed. We call it the boat because it has little sides on it. It also has a top that you can tuck in the sheets.
Well 10 minutes after going to bed, here they come.......Allie had spilled her water all over her and the bed. No worries.
They finally dozed off while we watched the Buckeyes loose a really close game.
Around 4 a.m. here they come into our room. K. Bug said her chest was stinging. She had just had that tummy virus.....but it wasn't that. We figured out that it was probably heart burn. We gave her a tums and she was better for a couple of hours. Then she was crying again. So the dogs and I get up with her. She had some pills the doctor had given her for the flu and I had her take one. It all went away.
Mom called in the morning to see how they were. Goose wanted to talk to her mom....she said, "We think that K. Bug has had a heart attack." We all lost it. 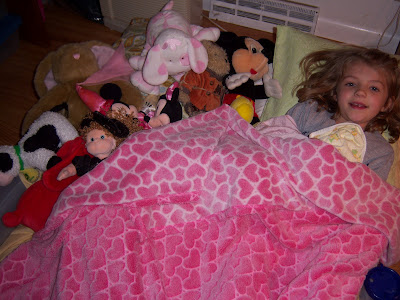 Goose was so excited when she saw the bunny to the far left , Her favorite thing right now is the same Build-a-Bear bunny. (Poor Daisy Duck has been replaced) She also decided that this receiving blanket was something really special to her. 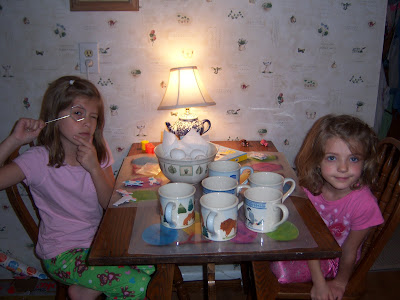 So when they woke up we colored Easter eggs. They wanted to do 2 dozen. I tried to explain it would be wasting if they weren't eaten. They were shocked to know that you eat these things. These two are so picky about what they eat. They don't even like pizza. But, K. Bug tried a boiled egg white and loved it. 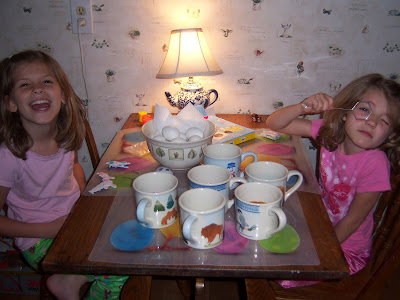 Goose said her eye was broken and the egg dippers were her glasses. So funny.
After they left Grampy and I took a nap......hah.
Some random things........
My computer......keeps going wacky. The Geek Squad that there is a virus trying to come through our not too secured internet connection. We have virus protection but this is from the server. Does anyone know about anything like this.
I am anxiously awaiting "Bloom" and "Heaven is Here" to arrive........tracking said today.
I haven't had Tanner this week yet as he has streph. I am only supposed to have the girly girls one day a week right now......SO I am semi-retired at the moment. I am kinda liking it I think. Well see when my paychecks are really tiny.
I had to have a repeat mamo yesterday. They wanted more chest wall. I got to look at the images and I would say they are fine. I wasn't worried about it as much as dreading the process again.
Took Piper to the vets to get weighed. He only weighed 28 pounds. He has grown alot since last year and he weighed the same thing. He is a light weight for a Springer but they said he was fine. I think Izzy and Piper have the twin to twin problem. Where one twin eats and gains more than the other. Izzy being the 12 pounder. She horses her food then tries to make Piper move aside his food for her. Being the kind gentleman he is he lets her. We have to stand watch.....or Izzy sneaks right on in. Piper rides so well in the car. Her loves to sit in the kids car seats. So funny.
I am going to work on my Big Foot projects so I can mail them with Easter goodies to the Colorado kids.
So far so good with Little Q. Tomorrow is ear surgery for him. They said he would be silly all day. That will be hard to keep him from crashing into things. He say the plastic surgeon yesterday but I haven't heard how that went.
Okay, I have been windy here this morning. Maybe because I had two big cups of my International Hazelnut coffee. My regular store quit selling my brand. But I got me two at Target yesterday.....so I am celebrating. I have a Keurig but haven't found a brand I like.(Plus I think they are $$$$) I got some sweet tea yesterday I will try. While at Target I got one of their frozen turkey breasts as they were on sale. Let me tell you we had one after Thanksgiving and it was so good. Even better than a fresh turkey that had been brined. Got us some dorito tacos at Taco Bell last night.....we never eat there.....but those bad boys were yummy.
Have a good rest of the week.
Posted by Debby at 9:24 AM

That K bug and Goose are so cute and look at all the fun they had. I chuckled over having the right coffee. I haven't got one of those Keurig's for don't they only make one cup at a time. That would never work for me! Taco Bell is a down fall for me, sin full! Yes, have a great rest of the week!

At Home in English Valley said...

Hi Debby, I bet you two needed a nap...I needed one just reading about it all. It's a busy week for me but instead of cleaning or baking I'm commenting... Have a great week!
Love, Penny

This looks like the best kind of sleepover ever! Times that they will always remember. :)

Aren't grandchildren just the best? Usually my husband and I have to rest when they go home.

Wow you have been busy! With the keurig you can buy a reusuable k cup and fill w your own coffee/tea. I have found that Kroger has the k cup cheaper or I use a Bed Bath and Beyond cpn. I find I drink less coffee w mine

The girls are cute. I bet they enjoyed their stay.

I love those two little girls together. I would have wet my pants laughing over the heart attack comment. It sounds like you have been a busy girl....and a bit wired on coffee!;>) xo Diana

I know what you mean about the Keurig. I own one and sometimes it's hard to limit myself to one cup! Anyway, sounds like you've had a very exciting week...your granddaughters are just so darn cute!

I bet the girls enjoyed their sleepover at Grandma's house. I bet Grandma enjoyed it just as much!

Ah the adventures of having the girls sleep over. This is making special memories for them.

My granddaughter had a recurring belly ache after she ate and it was wrongly diagnosed as dairy sensitivities.

She suffered for a few years on and off and then even when she wasn't eating dairy and it turned out that she had some nasty bug in her intestins. She was given some special antibiotic and is all better and she can eat dairy. JB

My grandchildren came over on Sunday and are still here. I have been reading Nei Nei's book since it downloaded on my kindle on the 3rd. I can't put it down. You will love it.

It's always something with kids isn't it.
Why don't you feed your dogs in separate rooms? That is what I do and there is no trouble that way.

Gotta love those grandkids. :):) You made me laugh. It just breaks my heart when they are sick. What little cutie pies. Thinking of you, on the health thing girl. Smiles, Susie(She Junks)

You have had a very busy week! Your grandkids sure a cute making their Easter eggs.

Here's a great way to use those turkey breasts: pop one into the crockpot. That's IT! They can even be partially frozen. Not water. And let her cook all day long. It's THE best and easiest way to prepare them and the cleanup is even easier!

You have been busy!!!! Glad you took some time to have some coffee. I agree, those machines are WAY to expensive for what they do!

such beautiful grand kids you have, wow you have been so busy, I enjoy so much reading your blog!

Debby, I enjoyed this post so much! And the girls are so sweet! Also, thanks for the Target frozen turkey breast tip, I will have to try one of those on your recommendation!
Best,
Gloria