I am KINDA back 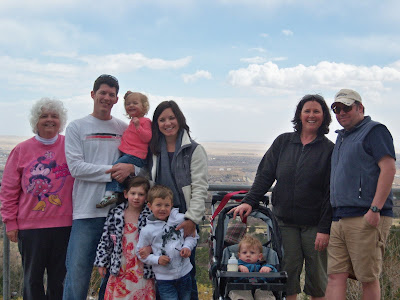 Hello friends. I have so much to share with you from my trip. Some fun photos and stories about my visit.....but that will have to wait. I wanted to post this picture for now. Not sure what my hair was doing. It was really windy but no one else has that look. Anyway.....my little cuties and their parents. Guess which adults are my kids. Well, the tall one next to me is my son and my daughter is the second from the right. Great visit but not so great return home. Of course I was flying Southwest, you know the airline that had holes in the plane. Luckily my flights out of Denver to Chicago and on to Columbus Ohio made it with out delays. Rocky weather but really not bad. We landed in Columbus as a tornado touched down near my home. My husband drove almost through it on the way to get me. We stopped for a bite to eat and then on home. As we were pulling in the driveway I got the PHONE call. My Mother had fallen and broke her femur and was in the ER two hours back the way we just came. She must have fallen the same time I landed. It took her 45 minutes with her cane to get her cell phone to fall to call the squad. Can't imagine the pain she was in. Anyway the ER she was in transferred her to a trauma center in Columbus. I was able to run in the house say hi to the doggies and change clothes. My husband and I got to the hospital when the squad arrived. She did break her femur but it is way more complicated. Six years ago she fell and broke the femur right were it attaches to her hip. They put a plate and pins in to repair it then. This time the fracture was below that plate and totally broke so now there is no bone attaching her leg to her hip. Then to complicate matters she has a knee implant in that leg. She was in terrible pain as they x-rayed and moved her. The doctors kept giving her pain medication but it didn't cover all the pain. We left at 1:30 a.m. from the Columbus hospital. She was in a room and somewhat stablized. She is scheduled for surgery in a few hours. The doctors aren't sure what they will do yet. The hospital is in a scary part of town. Since she won't be out of surgery til later I will spend the night at the hospital tonight. She has a little Yorkie that is home alone right now. I called two of her neighbors. The first one was unable to get her to outside but the second one did. He is going to let her out today and somehow I will go retreive the doggie and bring her to our house. My Mom is on the opposite side of Columbus., It will take 4 hours to just get the dog and back and then back another hour to the hospital. There is no one else to help. My brother lives in Alabama and will come when he is needed. He doesn't do hospitals. My Mom has had 10 surgeries in 6 years. He usually comes when she is dismissed. My Mom will be 84 Sunday. So must go for now, lots to do before hitting the road. I "think" I am glad to be home. So glad that I wasn't in Colorado when it happened. Hope all is well with all of you. I am in two swaps right now. I promise you will receive your goodies when all this settles. (((((HUGS))))
Posted by Debby at 8:18 AM

Oh, Debby, you must be exhausted. I hope all goes well.

Oh, my goodness, Debby, you've really got a lot on your plate just now. I hope your Mom's surgery goes well.
Jane-Jacksonville

I'm really sorry Debby. Prayers and thoughts going out to your Mom, you and your family. *hugs*

Oh goodness what a time you are having. I do hope you get some help somehow with all of this running around.

Welcome home! You have a nice looking family, Debby.

We need to do something about the cloud that is hovering over you.

By your description, I assume your mother is at Grant. I hear the doctors there are very good. I hope your mother makes a quick and full recovery. La

Oh Debby... so glad you made it home safely - and what a beautiful family! :) Thinking of your mom... and all of your travels to and from the hospital. Hope the surgery went well!
(your package went out yesterday, but please please please take your time with sending mine out! Seriously, no rush at all - take care of your mom and yourself and get some rest!!)

Your poor mom! And what a welcome home for you :(

Hoping that her recovery is swift and smooth!