Today I went to a play and a little musical at Mabel's pre-school.  Her Mama got her a special outfit for her to wear and her eyes just lit up when she saw it.  She got a pretty headband and tights too.  She was so proud of her outfit.
The children did a nativity play.  I couldn't believe that the 4/5 year olds could remember their lines.  I was impressed.   Also one of them was a narrator and read from a sheets of paper.  Wow. The teacher got down on her hands and knees and was the donkey.  She isn't a young thing either.  The baby Jesus was one of the kids sitting in a baby stroller, hah.  The outfits were really cute.  I guess this was a spur of the moment play.  After the play we went into the church and waited for them to change into their clothes.  Then here they came with Mabel in the lead (she was line leader today).  They had paper halos on and each carried a battery operated light and were singing "This little light of mine".  They were loud and all singing different words at the same time.
Before they marched in the teacher stood up front.  She said I know a lot of you are facing illness and sadness right now.  She said that these children have so much joy right now.  J O Y.........and they did.  They were happy and being so polite and just adorable.  How true that statement is.  I then thought that the word I choose this year was ENJOY.....and I chose that because it had the word JOY in it.
Now you are wondering where the pictures are.  Well, I have two in my camera memory as I forgot to take the card with me.  My cell phone had just gone dead before I got there. My DIL took lots, so I hope she sends them to you.  After the singing we went back to the classroom.  The children made frames with buttons to decorate.  They had each had their picture taken with a friend.  Then they gave that friend the framed picture wrapped as a gift.  They would tell that person Merry Christmas and Thank You.  It was so sweet.
So instead of the adorable children,  I will show you a couple pictures from around my house.  Maybe I can show you the others ones later.
Oh, Mabel was a fairy........but she was really an angel, hah.

The angels in my kitchen.  Little flower from school fundraiser.

My Christmas girls.  I told you I had an idea for them.
J O Y Banner from a giveaway a couple years ago. 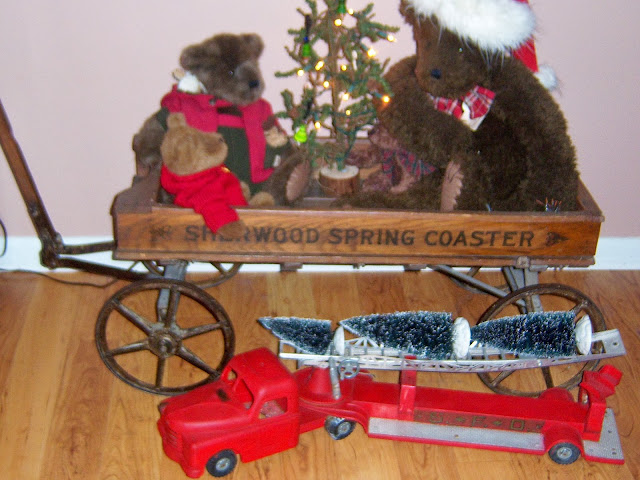 My wagon of bears and my Hubby's fire truck.  It was getting a bit rusty so I held my breath and painted in with A.S.C.P.   I couldn't believe that it was the perfect color and that you couldn't even tell I painted it.
Posted by Debby at 4:32 PM

What a sweet story. I love the word you chose and the garland.

How lucky you are to be able to see these plays. I miss the ones my children were in, it was so exciting for them and I was always so proud! Well, that's what grandchildren are for! lol!

I love your cute touches, the girls and the little critters. You are a child at heart, Debby! :)

Oh- I love those school plays. Mabel sounds like she looked adorable! I am headed two hours South tomorrow to a pre-school play, too. Love all your decorations, Debby. That truck spruced up nice- xo Diana

The kids Christmas plays are precious. Our church Sunday school teachers put up a play and it was cancelled last Sunday because of a major snow storm but it's back on for this Sunday. Maybe we'll get to see the pictures next time.

ENJOY I like that ... in my world we are often too busy to take the time to enjoy we need to slow down a bit and soak up the joy in the little things. I will always cherish the time I had at school events and church plays ... I miss VBS so much :) E

Your decorations are lovely. Merry Christmas to you and your family.

Your dolls sure are beautiful! I love the way you arranged them. Looks like you have one from All is Bright! I love her handmade dolls! Happy holidays my friend!

Isn’t it a bummer when you do not have a working camera with you. Loved seeing the pictures from your dear house. Hope you are OK. I just got back from Eloise...I rode over with a friend and spent the night...came back this morning. She is growing up sososoo fast. I am getting ready to post photos from yesterday. Love you...genie

I love the word you chose. There is so much to enjoy, we should all be very grateful. Your dolls are beautiful. Our weather these past few days has been, and will be for a few more days, rather nice. Now if only it could last until Spring! lol. You have a wonderful day, hugs, Edna B.